As life tends to be, last week has been a glorious mixture of loveliness and joy in the 8lb shape of young Freddie and brutal, bruising shite from other stuff that isn’t for the blog. I think in reaction to the latter, I reached out, as is often the case, to the distant promise of our next Florida adventure for some solace. That took the form of my first serious glance at flights for next August.

I checked them out last when we were picking our dates and booking the villa and despite everything the world is doing to destroy itself, the prices haven’t changed that much. Thomas Cook still seem to be the likely recipient of my hard-earned, as Virgin, as ever, in my experience seem to be asking me to buy the plane rather than hire a seat for a few hours.

For the first time we are in the position of our dates being fixed now with the villa booked, but to be fair they were anyway due to various work commitments, so I know I am at the mercy of the search results as to what we will pay. We’re probably not going to book until January or February unless some price miracle happens before that, but I shall be a slave to Kayak and Skyscanner in the mean time. The losing of myself in holiday planning for a few moments helped and as I have often done over the years in times of stress, upset and objection to everyday life, I brought up our villa’s website and had a walk around. Don’t judge me!

One of the bits of last week that was not too pleasant was saying goodbye to one of our cats. Now, I have never been the biggest fan or lover of cats, even our own, but this is never a nice thing to do. She’d been ill on and off for some time and over the last few weeks it had become increasingly clear that all wasn’t well. She was very thin and that was because every time she ate she immediately threw it up again.

Louise had the unenviable task of taking her to the vets and it was the kindest thing to do to let her go. 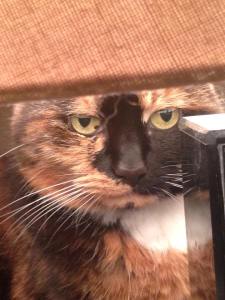 I will add that the fees involved for the vet to give her that injection and deal with her afterwards are absolute robbery. It wasn’t our prime concern at the time and I’m sure they know that.

In other, mundane every day news, we had a new fireplace fitted. *THIS* is the stuff you come to the blog for I know. Since we moved into the house we’ve had a very naff early nineties fireplace that never worked and looked totally out-of-place in our very old house. It has taken us this long to replace it as we’ve had more pressing matters such as holidays to have (as well as doing the kitchen, bathroom and a million other things). We are on a programme of updates and improvements before our next trip and that was the latest part. Now we need to redecorate our front room. The amount of horror that this filled me with drove me to seek out a professional to save me from it. He comes next Monday and will have it stripped, the paintwork redone and the papering done in 2-3 days when it may have cost me every weekend between now and Christmas, along with my will to live.

I shall share a photo of said fireplace once that’s done as it currently sits on a bare chimney breast as we stripped the wallpaper from that before it was fitted. How will you be able to live with that level of anticipation?

Continuing with the diary element of my ever so exciting existence, last night, Mustard were gigging. We started working for a local agent about a year ago and most of their gigs are in Phoenix Nights places. It is alive and well and exactly as that programme shows it. It hasn’t changed at all. Louise did the club circuit twenty years ago and some of the clubs I am now playing with Mustard are the same ones Louise and I went to back then. The same artiste photos are up in the dressing rooms and the same bingo, open the box and play your cards right have to be avoided between our first and second spot. However, they are lovely places to play with genuine people who take great pride in their clubs and do their utmost to make it a nice place to be for all concerned. 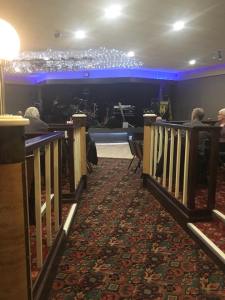 Last night’s gig was only possible due to Louise. Having packed up my car and driven forty minutes to the venue, I immediately realised that I had forgotten a box of stuff that was crucial to our PA working. So I had to phone Louise and ask her to bring it over. I put it down to a stressful week and me being stupid.

In the spirit of rock n roll I got home after the gig at around one in the morning and had four crumpets. Not a euphemism. Now, the rest of the day will be spent doing as little as possible.

4 thoughts on “Diary Of A Flabby Kid”