I have long been an admirer of Disney. I appreciate this may not be a surprise to many of you, but it is true. I do recognise they are not without their flaws. The fact that they insist on charging me to enter their parks and stay at their hotels being the largest. They are also a money-making machine, as is their right, but I do feel like many others, that they price things a little too high, and it has only been fifteen minutes since they increased the price for parking at one of their theme parks.

What really impressed me this week was their control of the weather. I know that may sound odd but there is no other explanation. Clearly, at the last Disney board meeting, as they were studying my latest blog posts, there must have been real concern and the risk of a profits warning at the news that we would not be returning any time soon. So they called the weather department with an urgent request.

Said department were clearly instructed to crank up the temperature and reveal the long hidden sun in the UK. These February balmy temperatures cannot be explained away with any other plausable scenario. Why did they do this I hear you ask?

Well I will tell you. If you trawl back through last (almost) ten years of this nonsense (who is sillier, me for writing these for ten years, or you for reading them? Think on) you will see that every time we say we have no Florida plans, it is pretty much always at the first sign of spring that we buckle and find some way to do so. Now, I am not saying at this stage that anything is booked. Certainly this year will not be possible, but alongside the Disney weather Gods making the weather nice, they also got their fierce competitor to announce a new roller coaster. 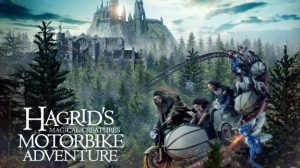 What nonsense is this? What am I going on about? Well, they realise that the decision to go to my happy place is always dependent on the green light from Louise. They also know, from my blogs, that Louise is a huge Universal fan too. So due to the combo of the nice weather and Disney making Universal do their bidding, this happened. 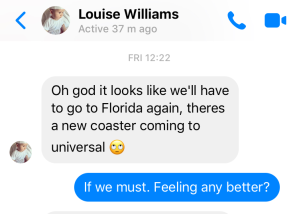 For those concerned for Louise’s health, she had been close to the toilet for many hours this week. You know she doesn’t mind me sharing this stuff, right back to the Vagisil episode of an earlier trip report.

So having sworn that we would not be darkening Florida’s shores within the foreseeable, with a caveat that nothing yet is guaranteed, the Disney board, along with their weather department and spies within Universal may have influenced Louise enough to have opened a door. It’s impressive.

When Craig, I hear you ask? When will you be returning? I don’t know dear reader, but thanks for asking. All I know is that next year contains a significant birthday for me and if I’m not stood in Epcot at some point during that day either the world will have ended or Louise will have changed my mind. It’s on!

For now, there’s no formal planning in progress (or real clue as to how to fund it) for many reasons. It needs to ferment a little in my mind first. Clearly Universal is “in scope” due to the newly announced roller-coaster successfully chipping away at Louise’s will, so that needs to be considered, and baked into the overall schedule. But, and this may shock you, I intend to learn the lesson of the last trip and not over plan things. This may strike you as strange and going against everything I stand for, and you would probably be right, but it needs to be done.

Things will be planned and organised of course, but I intend to leave more to ever-changing winds of freewill and the going of flows.

There is also the as yet un-researched (as I was sulking due to us not going) imminent opening of Stars Wars Land to look into. There are some practical things of course, like a wedding to organise and pay for yet, but the die is cast and the cogs are turning.

So thank you to the Disney weather department, you have played a blinder. I thank you, even though my retirement savings plan may not. Rebecca, Emily, don’t ever plan on inheriting a penny, you have and are enjoying it in the form of sunshine, fun and food, and I suspect you respect my decision.

Now that I have blogged about this, it shall be so, and the green light cannot be over turned. That is the law.

5 thoughts on “Hagrid Makes Me Happy”