With a couple of days with temperatures in the double digits allowing me to venture out without the need for more layers than a lasagne, the annual emergence from the bleak, dark chill of the winter cave begins.

My allergy to the dark, cold winter is covered in-depth in previous blogs, and this welcome appearance of lighter nights and warmer days literally brightens my mood. After last week’s bleak blog of breakages, the week just gone has felt like a literal reconstruction of our lives as things got sorted one by one.

Monday, our trusted and long time joiner/builder of choice came to start the process of figuring out how to fix the broken curtain in our bedroom. This may seem like overkill, but when you learn that rather than replace a £10 curtain rail, our plan is to destroy the bedroom entirely, take it back to brick and start again at a cost which would fund a holiday, that may be more of a surprise. It was to me!

As much of a shock to the financial system that is, it is long overdue. We’ve been here almost seven years now, and our bedroom was dated when we got here. It was acceptable in the 80’s I suppose and the previous occupants clearly spent a chunk of change on it, but it is at the stage that it is embarrassingly naff and definitely showing its age, so rebuild we must.

Whilst he was here quoting us for that, he took a look at our catastrophically broken kitchen unit. It took him about thirty seconds to fix it. Reinforcing my reputation as a DIY disaster, he kindly said that everyone has different skills and left to laugh it up in his van.

So that was fix number one.

Wednesday the dishwasher man came. He said some words about what was wrong with it like circuit board and element before taking some money off me. At least the long struggle of washing up by hand for several days was over. Nobody knows the trouble I’ve seen.

Thursday saw a man arrive with a car for us. No we haven’t bought a new one. It was a courtesy car to use whilst Louise’s was off being sorted. She is currently in a fraught legal battle with a lamp-post which was clearly not looking where it was going as she reversed at speed off a pavement. This careless lamp-post doesn’t have a leg to stand on and Louise’s car has the scars to prove it. That will be back, all shiny and new in a few days.

We are also in the process of decluttering the house a bit. We have built up our furniture levels to one that is not sustainable and we need to get rid. Our coffee table went to a new home this week giving us a little more room, but we still have a dining table and chairs and four seater sofa with matching chair to go. Don’t ask how we got to this state, you wouldn’t believe me. So if you are looking for either, hit me up, as the youngsters say. 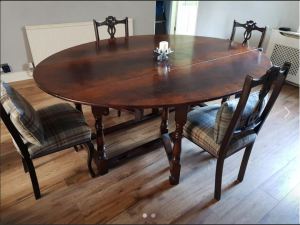 What a fun week, even before the strange mixture of comedy and tragedy that is work.

Anyway, we now have a quote and plan for the bedroom and work starts at the end of March. I do so love building work going on in the house. Anything that can deliver the greatest disruption is fine with me. I can’t wait…..(Spacey gif).

Louise will be away at the time on her “girl’s holiday” with folks from work. She’s off to Rome to celebrate her and her colleagues 50th birthday. I meanwhile will be sweeping up and taking dust out of every orifice and no doubt sleeping in the car.

On the subject of holidays, and what is this blog without such, I had a tweet last week (thanks Paul) pointing out that I hadn’t mentioned the “F word” in weeks. I know, I know. It is all part of the process of denial. If I do not say its name, the fact that there are no current plans will not be real and I will not have to deal with it. The after effects of the last trip are wearing off and the levels of “F word” in my bloodstream are starting to get low. I must put such thoughts from my mind as with bedrooms and weddings in our imminent future there is nothing to be done about it. Again, nobody knows the trouble I’ve seen.

I shall have to take comfort from the meagre positives such as not having to wear my attractive bobble hat, scarf and gloves to walk the dog the last few days. Yay?