The subject of this week’s blog will come as no surprise. Let me start by thanking everyone who sent their congratulations and lovely thoughts when I posted Freddie’s photo on Facebook earlier this week.

I’m going to try and talk you through the events of the last week but if I’m honest my head is a bit scrambled and I’ll probably get bits wrong. It’s been a heck of a week for all sorts of reasons, not least becoming a Grandad!!

At the start of the week we knew it was likely that he would be coming soon. Rebecca was being monitored daily as she was having a few health issues herself. The main one was Strep B, which I’d never heard of but there was a risk it could be passed on to Freddie so a plan was hatched to kick-start things sooner rather than later.

By Wednesday Rebecca was in hospital knowing that she wouldn’t be going home until he arrived. It took some time and a lot of drugs to start her labour and as much as that was tough for her and Tom, trying to carry on with every day life knowing what was going on and what Rebecca was going through was tricky.

By the end of the working day on Thursday it was clear that he would soon be with us and sure enough at 9.16 that evening he made his entrance at a healthy 7lbs and 14oz. His first few minutes were a little worrying for Rebecca and Tom as he wasn’t doing a great deal when he first popped out and the delivery room soon filled with literally dozens of medical folks all doing their thing to sort him out.

Thankfully all was well but he spent his first night in the intensive care unit just to make sure. He was then quickly moved to special care where he still will be until (fingers crossed) tomorrow when he goes home. He was on a drip for a while just making sure he had no infections but over the next couple of days he’s made steady progress, coming off that and starting to feed etc. The biggest landmark so far was when Rebecca was allowed to dress him. That first outfit had been planned for a long time! 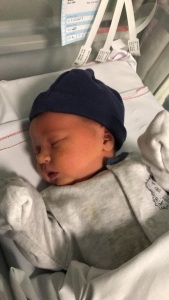 So on Friday we made the trip up to the hospital to meet him. We were all excited and eager to get there which made Louise’s insistence on stopping at several shops to buy a balloon not at all frustrating, making the twenty-minute trip to the hospital last over an hour!

Rebecca was obviously tired but thankfully safe and sound which was a relief after months of privately being terrified about her going through labour. Because they had to speed up her labour dramatically for Freddie’s benefit they put her on some very strong drugs to take her contractions to warp speed. She was told she wouldn’t be able to cope with the pain levels that would bring so they said they would give her an epidural. Unfortunately, they struggled to get that done and it took two hours to administer it during which she was in inhuman amounts of pain. I am a bit glad I didn’t know that until after the event. She has some impressive bruising for her troubles.

We are all incredibly proud of her and also proud of Tom and thankful for supporting her through labour and the last nine months which have not been easy for Rebecca.

One by one, as only two were allowed into the unit at a time, Rebecca took us in to meet him.

With him being in the special care unit in a glass case of emotion it wasn’t possible to hold him, we have that treat to come later today, but it was amazing to have him hold onto my finger and for us to say hello.

Thankfully, after not too long, over the weekend, he was able to be held by his Mum and Dad.

Rebecca was discharged yesterday and if all goes to plan they should be able to bring Freddie home tomorrow but we’re not sure yet.

It all feels a bit surreal at the moment. I’m sure that will change once he’s home and normal life can begin and I can’t wait. The next generation begins, and I’m sure it will be an adventure for all but mostly Rebecca and Tom. There’s a huge sense of relief all round that he’s finally here and everyone is fit and healthy. Here’s to a new chapter signalled by his arrival.

I have to go and get ready now as I have a date with my Grandson during which I’ll hold him for the first time. I shall be starting the Disney indoctrination by talking him through the plan for his first trip!