It can be hard to find the amount of time I’d like to dedicate to writing these things. Considering I have to fit it into the seven free minutes I have each week, the quality of them is just about acceptable but about 50% of what I aspire to. Anyway, over the next few weeks as I cover our time at Siesta Key, I will have an ingenious time-saving plan. I can simply copy and paste the day I’m about to write over and over as we did pretty much the same thing for a week. Stand by for a lot of pictures of sand and blue skies with some food towards the end of each day!

For those who have lost track or didn’t care, today was Sunday. We were to spend it worshiping Louise’s favourite deity, the sun.

We woke up naturally at 8.20 and took a leisurely shower. I suggested that tomorrow we try it one at a time. Breakfast was a very un-Hash House like bagel and a cup of coffee. I was worried that I may waste away to nothing on such meager rations. It had almost been twelve hours since we last visited the supermarket, so that was the first stop of the day for beach essentials. That consisted of lunch in the form of sandwiches and snacks and some tackle for the enjoying of the beach such as lilos and umbrellas. Americans seem allergic to shade but us pasty Brits need all the protection we can get from the merciless sun.

I watched some football on the TV upon returning home until everyone was ready . See how I have learned not to pester folks to be out of the door early every day of the holiday!

We wandered over the road and found a suitable spot on a very spacious and idyllic looking beach. The first job was to blow stuff up.

Twenty minutes, and a couple of cardiac arrests and blackouts later, things were of a suitable size and girth. The fact that nobody used the bloody things for the whole week was hilarious.

Siesta Key beach is as lovely as its awards and reputation suggest.

Our rented house was at the beginning of those tracks in the sand you can see in the picture below.

Over the years Louise has done her best to sample all of life’s ailments, diseases and injuries in the US. I think it is some sort of crusade or comparison to prove the UK’s NHS is better than the US alternative. I have documented all of these, some in more graphic detail than I should. I think we all remember the Vagisil escapade some years ago?

Well, this year I think she has surpassed all previous efforts. She had burnt boobs. This was not as you may assume a result of getting her baps out in the sun around the pool at the Royal Pacific. No, that’s how I burned my boobs. Instead, it was all down to one more example of the very strange things ladies do in the name of fashion. To allow her to wear certain outfits without the support of a bra she had used some nipple covers. Now, men I hear you. What the f*** are nipple covers? They were news to me, but they are a thing.

I always thought they were for the exclusive purpose of preventing breast-feeding mothers from having permanent wet patches. When the girls were very young it wasn’t too uncommon for me to wake up with said nipple cover attached to some part of my body. That’s all part of the magical parental journey.

Now, I have discovered that to prevent “chapel hat pegs” when wearing certain kinds of dresses, these posh elastoplasts are used to keep the bad boys at bay.

Somehow, these had caused some very serious damage to Louise’s puppies and as much as I am making light of this, they looked bloody sore and no fun at all. With this in mind the next few days were a struggle for her to find comfy sunbathing positions or indeed to wear clothes that actually touched the damaged area which drew a few funny looks I can confirm!

Traditionally at this point, Dad will apply a reservoir of factor 50 and then immediately wash it all off in the sea. Today was no different.

We all rested, read and other things beginning with R. It wasn’t too long until lunchtime rolled around and I wandered back to the house to pick up the stuff we’d bought earlier from the fridge. Ryan, on his first outing of the holiday earned his stripes carrying it all back to the beach.

We had pre-made sandwiches which were, as you might expect, huge. As I had been in charge of choosing lunch there was also a good amount of snacky crap, such as huge bags of chips (crisps) and some chocolate brownie things that I can still taste today. I got some beers too and Dad went crazy having about four which is probably more than he drinks the rest of the year!

The afternoon passed without much else to report. We rested and read some more, and as Louise had thrown one seagull a Dorito, our section of the beach looked like a scene from a Hitchcock film.

You can clearly see some lovely birds in that last photo!

That was the ONLY time one of those bloody lilos was used. Literally a waste of breath!

After a tough day of this sort of thing we started to drift back to the house in phases from around 4pm. Showers and readying began. Being our first night we weren’t sure how or where to get the plethora of free transport options to the village so I played safe and ordered an Uber. It took twenty minutes to get to us and about three minutes to take us to our destination. That was Ocean Boulevard, the road that runs through Siesta Key Village and includes many shops, bars and restaurants. Thankfully it now looked a lot less like Magaluf and much more like the sleepy, relaxed location I had researched all those months ago.

We wandered for a bit and ended up choosing The Hub. 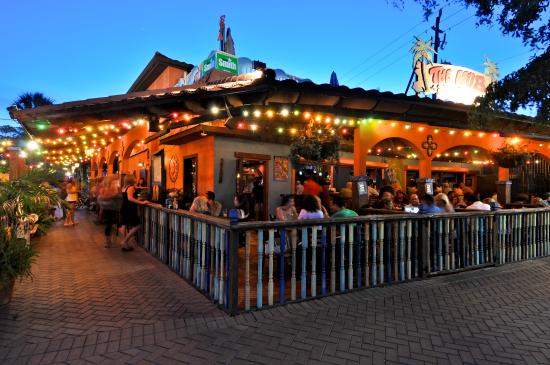 With a twenty-minute wait for a table we took to the bar and I had my first beer of the trip.

The ladies had cocktails, apart from Emily who had left her ID at the house and Dad another beer.  Here’s Emily looking very pleased with her Coke.

We were seated and then served by Jazz who I can best describe, in Louis Walsh style as reminding me of a young K D Lang. As the vast amounts of food we were about to order wouldn’t be enough Jazz persuaded us to get some chips and salsa to gorge on whilst we looked at the menu.

Nachos for Lousie and Emily, who clearly thought the chips and salsa were not sufficient.

Half way through the meal Dad felt very rough and had to escape to the loo. He waited outside for us whilst we finished and I ate his steak. We put it down to too much beer, rich food and sun and he laid off the beer for the rest of the trip and felt a whole lot better for it. If you don’t drink a lot, suddenly drinking can be hazardous.

The bill was $130 plus tip and the food was excellent. We rounded off the night with yet another visit to the supermarket. Dad bought a huge corkscrew for the bottom of his umbrella. This was to bury it deeper into the sand. The beach had been quite breezy today, which was very welcome in the blazing sun, but it did cause some umbrella carnage from time to time.

We of course had to buy some sun screen as the one we had brought with us and used hardly any of was no longer suitable for reasons I can’t explain and we also got some aloe vera for our burnt bits and Louise’s toasty nipples. I think they were a band in the seventies?

We caught the free bus that was parked up outside as we left and we got off a stop early as it was pitch black and we couldn’t tell where we were in the dark. Bed was found at a hedonistic 10pm.