I’m quite a fan of a four-day week. Having had my second Friday in a row off, it does make a lovely difference to your weekend. These shorter working weeks will be something we can all enjoy when the economy collapses properly, the pound is worth about as much as winning The Voice and we move to a three-day working week. Look at me and my second political comment in two weeks. That’s enough of that.

I spent my Friday off doing what most people do I think. I went to the tip. Since the council replaced our bin with a thimble, this is becoming a weekly occurrence. I then did some pottering, tidying, small amounts of DIY and then played my bass. It’s this hedonistic lifestyle that will no doubt see me in an early grave.

I did have a quick look at the dollar rate too. Horrific isn’t it? I was hoping for a silver lining to the Trump win in the form of a dollar collapse and the pound climbing against it somewhere close to the 1.40 mark. It hasn’t moved at all. Come on America, please can you make major economic shifts and decisions to make my dole whip a bit cheaper next April. It’s the least you can do.

On Friday evening I went to the cinema with Louise and Emily to watch the Fantastic Beasts film. It was OK. I don’t know what I was expecting to be honest but we were a little underwhelmed. It wasn’t bad in any way, and it was an entertaining enough way to spend an evening, but it just struggled to get going, didn’t seem to have much of a plot and Eddie Redmayne was still playing Steven Hawking (pre-illness).

Like most films these days, it relied heavily on CGI effects and the last twenty minutes were just an extravaganza of huge effects, destruction and fast paced action. It also seemed to end about four times. I know that sounds odd but there were about four different points were we thought it was ending only for it to go on for a bit longer. I’ve probably made it sound worse than it is to be honest but when you extend a franchise like Potter, you have a lot to live up to.

I did see a lot of potential for how this could fit into the Universal parks though. I have no idea if this is planned or not, but this Potter landscape in the 1920’s would work really well. A coaster type dark ride based on capturing escaped Beasts perhaps, or a tamer attraction showcasing all sorts of Fantastic Beasts in a walk though sort of thing. See, I should totally be working in Florida right now making up this stuff for a living. Right?

If I were doing that for either of the major theme park companies, one thing I would have done everything within my power to stop (aside from Stitch’s Great Escape of course) would be these new cabana things in the Magic Kingdom, assuming this rumour is true. 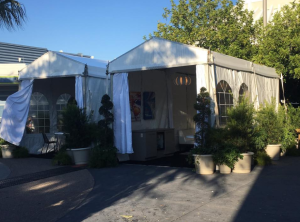 The rumour is that for $650 a day you can rent one of these things for the day.  Food and drink is extra apparently, so you can sit in a white tent whilst charging your phone in a theme park. If the date were April 1st this would make sense, but what are they thinking? Aren’t they going to sort of kill the theming of whichever area of the park these go in? If you are going to shell out $650 doesn’t that mean you could probably afford to stay at one of the monorail resorts, so if you got hot and or tired you could nip back there for an hour or so?

It is clear to me that these Yanks need some middle-aged Boltonian to put them right on what should and shouldn’t be in their theme parks. I shall sit by my phone this evening awaiting the call. I know all the high ups in Disney wait for my post every week so it shouldn’t be long. I’ll let you know when we move out there.