Thanks for all your well wishes last week. They didn’t work, but thanks anyway.

Sweet Jesus monkey balls, I have been ill. Whatever it was that came for me took me out at the knees and reduced me to a sweaty, quivering, moaning mess for all of last week and I’m still not 100% yet. So this week’s musings will be brief again due to my continued roughness and the fact that you really don’t want me to document what I did last week. It was not pleasant.

It wasn’t a traditional cold or similar as I have been without the trademark excess mucus. Instead, it has been a high temperature that has seen me hot, cold and everything in between in the space of a few minutes. At its peak, I have been rocking myself back and forwards in bed, emitting low moans pleading for help or death, whichever would be quickest. Sleep has been a stranger for most of the week too due to the fact that I was instead locked in some hallucinogenic hell, with every muscle aching and a headache like Oliver Reed’s throughout the seventies.

It was only on Friday that I started to return to normality, and beyond bored with daytime TV and watching emails build up in my Inbox I did some work from home. I won’t claim it was my most productive day, but having lost almost a full week and cancelled more meetings than I care to think about, I felt better somehow having got back into it on a Friday, so the Monday to come won’t be as gruesome.

I don’t think they got it from me, as they wisely stayed away from my grottiness, but now Tom, Rebecca and Freddie all have colds. They went out last night to celebrate their anniversary and Freddie stayed with us. 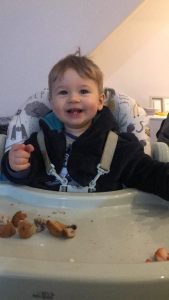 A lovely meal, drinks and paracetamol is not the ideal mix for a night out but, they soldiered through and have just taken Freddie home for an afternoon of cuddles and TV on the sofa which always makes things better.

So with apologies for the very poor word count, I have little else to report after my lost week of illness. Hopefully in the coming days I can declare myself back to full fitness and then we can get these blogs back to the thrill a minute action fests they always are. Right?