Well, here we are. The final post before our next adventure. At times I have seriously doubted that this countdown would ever end. It’s been a struggle I’ll be honest and one of the toughest to get through, but of course that may just be perception and me being a drama queen.

To add some last-minute spice to the mix, my Mum is hospital, suffering from some sort of virus/infection. She’s on the mend I think with some antibiotics and TLC and hopefully she’ll be home and fully on the mend before we leave.

As always seems to be the case, the final week at work has been a doozy, spectacular in its shitness, just to ruin any potential joy of knowing it is my last for a while. Work is doing its best to keep its icy tendrils dug deep into my being until the last possible moment . Hopefully, I’ll be able to switch the work brain off at Manchester airport as I remove my work email account from my phone for a couple of weeks with a deep joy.

Still no bloody FastPasses for Flight of Passage or Slinky and believe me, I’ve been trying. It’s personal now. I didn’t want to ride the bloody things anyway.

As it’s been far too long since we went away, the reminder of how stressful the final few days can be had been forgotten. There are a million things to sort out, mainly pet related, mixed with a good amount of work nonsense that I can’t detail here. Add to that my recurring waking nightmare of realising just when it is too late that I have forgotten something, and I will be delighted when we are finally on our way.

The holiday haircut has happened. Spending so long in the chair can be tiring in itself as I’m sure you will appreciate. Thankfully, it was a different chap this time, and one that doesn’t feel the need to make conversation. The toenails have been cut, and it is important that everyone appreciates this level of personal grooming. It’s all part of the million small parts that go into making one of these trips work.

We are so close now. I can almost taste that going on holiday excitement. The traditional by the door photo will need to be tweaked this time. Rebecca has had the audacity to go and live elsewhere, so she won’t be “home” on the morning we leave. Don’t worry, I will creatively solve this issue and we may even have some new photos and traditions now!

The early alarm call, the panic to get last-minute stuff into the cases, standing at the front window looking for the taxi whilst simultaneously shouting at females to be ready, trying not to get tearful whilst saying goodbye to the dogs and telling them you won’t be long, even though you will, and they have no idea what you are saying, and then the surreal journey to the airport. The sun is rising over the sewage works as we cross Barton Bridge by the Trafford Centre. The tiredness and adrenaline give a nice spaced out vibe as you’re new “what are you travelling in” clothes feel like you are wearing someone else’s gear. We are a beautiful mess of new trainers, bumbags and comfy pants.

As we come off the M60, I check Ryan for the 373rd time to make sure the passports are there and we then are deposited into departures, sweating slightly due to luggage exertions, craning necks to check the nearest screen for information on your check in desk.

The double-edged sword of wanting to be checked in within seconds, and knowing that in two weeks you would give several body parts to be right back at this point battle within your brain before security is endured followed by a huge breakfast, some WH Smith browsing and the purchase of some overly priced smelly liquids in duty-free precede us sitting at the gate with a Starbucks and a feeling that I’ve already put all the weight back on that I spent the last few weeks taking off.

This routine is so familiar it’s like a family friend.

Thanks for sticking with me during this countdown. Stick around for some social media action, including some Facebook live stuff as and when appropriate. Say hello, either online or if you happen to be over there with us, in person. Even if you don’t want to talk to me, which is understandable, you can have a photo with Ryan if you like. 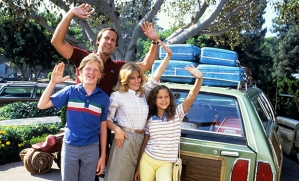 We made it! See you back here on the 16th of September.