Today’s blog post is a salute to all Mothers, but mostly mine and Louise’s. Thanks to you both for everything you have done and continue to do for us.

I had a right old whinge last week about a load of problems that weren’t really. In the end, last week wasn’t as bad as I feared. It was worse. Now of course, I don’t have any real problems and events in London last week reminded me of that, but with that considered, in my own little world I had a week so stupidly busy that I didn’t even have time to moan about it.

Our bathroom renovations started and we currently have an empty room, stripped back to brick and a lovely collection of dust on every surface in the house. 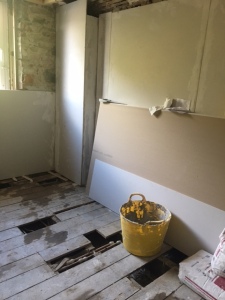 Our boiler is in though and it is just delightful to have a boiler that is younger than me. It is amazing that having just one room out-of-order can seemingly send shock waves throughout the entire house. There is mess everywhere and where this isn’t mess there are large boxes containing stuff to be fitted into said bathroom in the coming days (hopefully).

Our chosen workmen have been great and were at the front door like clockwork every day at 7.30am. They have worked their socks off and made good progress. We are through the worst now I think, and from here on in the room starts to look better, not worse!

They have a week and a bit to go and just before they finish more workmen will arrive to dismantle almost all the gubbins at the back of the house, like our car port, walls and anything else in the way, to erect our new one large wall and roller shutter door thing for our cars. We like to do things the hard way.

My busy state was created by all of that house nonsense and a million other things going on at home plus my actual work life. Due to a perfect storm of team holidays, unavoidable meetings out of the office and yet another million things going on at work, I can’t remember a week when I’ve worked harder or faster. I earned my money for sure.

Monday was especially fun. Louise was due to collect her new car at 6pm, and with that in mind I dug out the V5 form for the car we were trading in at 8am that morning, from its secure holding place where it could not be lost from. Louise took it to work with her and we went about our day. Fast forward to 5.50pm and I get a call from Louise. She had lost that V5 document. It had lived safely in my secret special documents place since the day we got the car nearly two years ago, but within a matter of hours Louise managed to lose it. She had placed it in her diary which she carries with her to all of her patient appointments every day. What could possibly have gone wrong??

So this led to a whole load of faff, stress and last-minute nonsense with the garage having to undertake administrative somersaults to still allow Louise to take her new car home. Those somersaults would cause a load more admin for us too as they couldn’t pay off the remaining finance until we got a new V5 and that would mean we were paying for two cars until that was sorted. I was not pleased.

A replacement was £25 and a good few days to get hold of one but Louise told me to hang fire until she had a look for it in a few of her regular patients’ houses. I seethed for almost 24 hours, until she text me to say she had found it in a care home. This falls into the “only Louise” category. The form was dropped off at the garage and hopefully that will be the last of it.

Living life at a million miles an hour as I did last week did mean that it flew by. With only a few days to go now before we holiday that is always welcome. I have a couple of gruesome milestones to endure in the remaining time, such as a dentist trip tomorrow to hopefully sort out a developing issue and a particular meeting I am not looking forward to the week after, but as life has taught me over the years, these things come and go before you know it and we really are entering the final part of our countdown now. I’m not sure who will be most pleased when we get to the airport, us travelers or you lot, as you heave a huge sigh of relief that I can’t wang on about it anymore.

I do not like the dentist. My childhood dentist had all the bedside manner of Freddie Kruger and ever since I have dreaded every visit, more so since I had to start paying for it too. Needs must though as I cannot go on holiday and take on all that food with a set of gnashers not operating at 100% efficiency. They have a big job on.