We have two birthdays in the house today. Incredibly Emily is twenty years old. How this can be when I am still the same youthful, svelte specimen I always have been I do not know. For reasons unknown, Emily isn’t too keen on leaving her teens and has spent much of the last few weeks sulking about becoming old. This sulk has meant that she wanted minimal fuss today so there is to be no large family gathering. Presents were still gratefully received of course but she has gone out with her best friend for some food and a film.

Oli wasn’t invited even though it is his birthday too. He is four today, but if you use the standard calculation for dog years that means he is twenty-eight. So it could be worse for Emily if she were aging at the same rate that Oli is.

He seems less troubled by the aging process.

Emily’s birthday is traditionally one of the last landmarks on our countdowns to a holiday. Having ticked off Rebecca’s in May, followed by other non family landmarks such as Glastonbury, Wimbledon and the Open Golf, there is no denying we are getting close now.

When you’ve been blogging as long as I have now, I have no doubt that there has been a lot of repetition since my first post back in November 2009. At several points between then and now I have no doubt talked about the underlying reasons for my Disney/Florida obsession. I’m not going to go there in detail again, but this week my Mum and Dad found an important relic from our Florida history that goes someway to remind me at least how I fell in love with the place all those years ago.

Back in 1980, (and here I might go into the detail I said I wouldn’t) instead of going to Spain for our usual holiday, a ten-year old me was very excited to find that we actually booked to go to Miami, mainly due to the incredible cheapness brought on by a dollar rate well over $2 to the pound.

Whilst searching for other stuff in their house this week, my Mum and Dad found and brought round a menu from a restaurant in Miami called Pumpernick’s. We went several times during our first holiday and it has a lot to answer for. It exposed me for the first time to the wonderment of eating in the US, with strange foreign concepts such as good service, huge bowls of warm bread and coleslaw on the table when you arrived and desserts you would kill for. We were so gobsmacked by the whole thing that we asked if we could take a menu home with us, as nobody back home would believe us if we told them. Remember that back home was a 1980’s Bolton yet to become all exotic like it is now.

The menu is huge in every sense, and even now it makes me hungry whenever I look at it.

It had all those things you heard about in US programmes of the time, which were of course the likes of MASH, The Bionic Man and The Streets of San Francisco! Pastrami was a mysterious thing only leading men had on rye…whatever that was.

It’s funny seeing it again after all these years. The fascination it began for me has cost me endless pounds both in terms of money and weight. A bit of googling has revealed that it has long since closed, which is no surprise, but I also found out that it had already been there for years by the time we found it. Here it is in the 1950’s.

It is now a Walgreens. 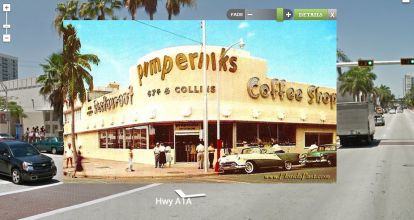 It’s hard to explain now how this blast of Americana had such an effect on a ten-year old boy from Lancashire, but clearly I am far from recovered from it. The entire first trip obviously had many more aspects which have forever stuck with me, even though we only spent two days in Orlando at the then only theme park.

Look at me, all oblivious to the endless obsession that lies ahead.

So what got you hooked? Tell me your Disney obsession stories in the comments below!

14 thoughts on “Pumped Full of Pumpernick’s.”