Jazz Flute, wheels of cheese, sex panther and the gun show.  It can only mean one thing.  Yep, Anchorman is on, and it is one of those films that make me laugh no matter how many times I see it.

Every character is excellent, but I do have a soft spot for Brian Fantana, played by Paul Rudd. 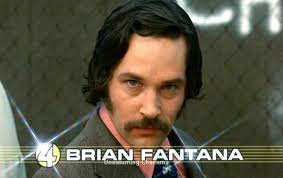 So forgive me if I’m a little distracted as I rattle this off.

Last week I forgot to plug something that I should have.  After a break of too long I finally penned something for the WDW Dads site, so please, if you haven’t already, pop over and have a read.

OK, so other than pointing you at day twelve of the trip report, I think we can begin.

The week just gone has been fairly ordinary, as it was filled with far too much work…roughly about five days worth.  I made the schoolboy error of arranging to be down south in Head Office on Thursday and Friday for some meetings.  As everyone knows, Friday afternoons is when the volume of traffic on the UK’s motorways doubles as everyone tends to be at the opposite end of the country that they need to be.

Thursday was a fancy dress day in the office.  How I enjoy these sorts of things!!  The theme was purple.  I could explain why, but really it wouldn’t make that much sense, so I won’t.  It may not surprise you to learn that my wardrobe does not contain a wide variety of purple garments, so this caused me an issue.  I dallied with the idea of going the whole hog and renting a proper costume, but

b) I would have felt like a giant tool

c) I left it too late so sort one out

So instead, with an impressive amount of forethought, I sent Louise a text at 5pm on Wednesday evening, asking if she’d call somewhere on her way home to get me some “purple clothes”.  The results were a purple polo shirt and a pair of purple jeans.  Yes, I now own purple jeans…skinny ones at that.

So I left the house at 5am the next day looking like an overweight bruise.  The day passed without too much to note, and I had guessed the level of effort correctly.  It is always a concern with these things, especially when new in a company, that you gauge this correctly.  You don’t want to turn up in a Barney costume only to find that everyone else has worn a purple hat.  Ironically, someone did turn up as Barney, but most were just in simple purple attire so that was OK.

After a busy couple of days, the end of the week approached and for the first time I had to do the drive north on a Friday.  The levels of fear and trepidation felt were totally justified, as the usual three and a half hour journey turned into five.

If it is possible to hate a section of tarmac then the M6 is it.  Listening to the radio, they seemed to gloss over the severity of the chaos that was taking place.  As I came off the M6 toll, the brake lights lit up in front of me, and pretty much stayed on until I left the M6 at Junction 22 several hours later.

It was pants.  The constant stop start brake nonsense was only surpassed in the aggravation stakes by those who felt the need to fill the couple of car’s lengths I was leaving between myself and the braker in front.  By Crewe my mood was black.  Never shall I meet anyone in Marlow again on a Friday!  Seriously, what happens to motorway traffic on a Friday?

Oh yes, and at the risk of generalising….if you drive a Mercedes Sprinter you are probably going too fast!

Once home, the weekend has been uneventful, due to post holiday insolvency and the fact that Emily and Louise have been buried in coursework.  Of course, Emily has been off all last week for half term but felt it better to wait until the weekend to get it all done!  Ironically once she had finished it about half an hour ago, she found out from a friend that it wasn’t due in until Wednesday.  Justice!

We’ve spotted Rebecca a couple of times for meals and bedtime as her hectic social calendar keeps her busy.  She’s started a YouTube channel with her friend, and on Saturday she went to Manchester for something called a YouTube gathering.  I don’t really understand what it was, but I think it was an event where all these internet phenom….phanom….fenome….people who have lots of people watching their videos went to meet their fans.

Anyway, I should do a push for Rebecca’s You Tube channel, and ask you to subscribe as her numbers are a little low right now.  Click this!  I hope that is the right link.  Go on subscribe, and make me a hero in her eyes!!

Next time I bump into her she may express her thanks if she gets a minute.

Who knows what next week will bring, but I can assure you it won’t see me on the M6 on Friday!