No, none of the above.  It was in the autumn of 1983 that I attended my first ever gig.  I was fourteen at the time, and had to really convince my Mum to let me go with my brother, as it was at the Manchester Apollo, in Ardwick.  Trust me, she was right to be worried.

Now, a fourteen year old in 1983 had a smorgasbord of musical delights to choose from as my first gig choice.  A look at the charts of the time reads like a who’s who of big hair and pompous pop.

I was not one of normal tastes to be honest, and even now I tend to not like the mainstream.  Adele, Coldplay, U2, and the likes do not and have never floated my raft.  I may have mentioned that a couple of times?

Back in 1983, influenced by my brother for sure, I liked a band not at this stage really troubling the charts.  They were cool, niche and under the radar, which is also known as skint and not famous.  Being vaguely musical, which means that I’d started playing bass about six months earlier, and my brother at the time being a drummer, we appreciated the muso-ness of bands, and none came more muso than…..Level 42.

At this time they still wrote jazz funk instrumentals, and had some distance to travel to get anywhere near the chart topping days of about four years later when they found a few hits and multi-million selling album or two.

So off I went to my first ever real gig, and was blown away. 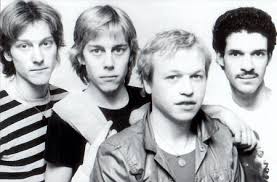 Fast forward twenty-nine years, and on Friday, the same two of us sat in the same theatre, with a few more pounds and a lot less hair, to watch them all over again.  I’ve lost count of the amount of times we have seen them live in the intervening years, but it is a lot.  The line up has changed a bit, but in recent years with a settled line up, and a re-established following, they are back playing fairly large venues again, and despite their advancing years they still have it.

I know they will not be everyone’s cup of tea, and most folks will only be aware of a couple of singles, but that’s Ok.  I don’t need you to like them too!

In recent years the usually annual gig has become a chance for me to have a night out with my brother, which we don’t do often enough.  Now you will know that any night out involving me will involve food, and on Friday we met after work in Manchester and wandered up to the ever so trendy Northern Quarter.  A place full of grown men in cardigans and converse, meeting in pubs after a hard week creating mood boards at their inevitable agency.

We went to Trof.

The music was too loud, it was jam-packed, and there was nowhere to sit, but we got a drink and persevered anyway, based on my brother’s previous dining experience here.

We took a table as one appeared, and despite a small hiccup where my brother tried to order from some girl who just happened to be wandering past our table, we were soon eating.

We had a Middle Eastern Sharing Platter to start.  It was your usual olives, feta, halloumi and falafel etc, and it was delicious.  By the time our mains came we were already filling up, but I somehow managed to neck all of my Pulled Pork Burger and Fries.  My God, I was stuffed, and we both had to leave fairly quickly to get some fresh air and try to walk off the impending cardiac arrest.

Thankfully we had a decent walk to the car, a short drive and then another walk to the theatre so we felt less like dying once we got there.

You may not believe me, but it was busy.  The queue for a drink was in need of a fast pass so we didn’t bother.  I couldn’t fit another ounce of liquid in my stomach anyway!

We took our seats, applauded politely for the support guy and waited for the main event.  So the lights dimmed and of course a dozen numpties came charging from the bar, as they had to have every last second in there didn’t they.  So this meant that they had to get to their seats in the dark, making the whole row stand up, and therefore blocking the view of half the theatre just as the show started.

These same folks then went for wees, more drinks, and inevitably more wees pretty much all the way through the show.  I almost wore my tut out.

I took a bit of video, all dodgy quality but here is the opening, until the row in front had to stand up for the aforementioned twonks came in from the bar.

The gig was great as ever.  We marveled at the musicianship, felt nostalgia for the video clips shown on the big screen behind them, and clapped a lot.

They played a mix of some really old stuff, which had some of the less cool and hard-core fans than us a little bemused, along with all the hits….and there are quite a few.  Something About You, Hot Water, Lessons in Love, Running in The Family, are the most obvious ones, but they have shifted a load of records over the years.

They left us with ringing ears and a promise of a return in 2014 with a new album.  We wandered back to the car wondering what that would bring, and picking out examples of the fancy Dan musician-ship we’d just witnessed that separates them from mere mortals and Dire Straits.  Oh yes, I could never tolerate them either, despite that bloody Brothers in Arms CD being in every house in the 80s.

I hope you enjoyed the slightly different approach this week.  It still more or less took the form of a trip report, but I did forget to take photos of our food!  Mind you it was so bloody dark that us two old gits had to use the lights on our phones to read the menu!!  Once illuminated we then had to move it in and out of eye range until we got a fix on the microscopic text.

That wouldn’t have happened twenty-nine years ago!