Holy hell, I have spent some money today. My aversion to doing so is well documented in the many years of writing this blog, but if you’ve been around for a while, you’ll know there are some chunks of change that I spend with a smile on my face. Today has been such an occasion.

After booking way back last October, we now have just eight weeks to go until our trip. It has certainly snuck up on us and as they say shit just got real. The first expense today was to pay the balance on the villa. If you’ve forgotten, never knew or don’t care either way, the villa we will be staying in is the Disney Palms Villa.

With that all paid for now, at least we’ll have somewhere to sleep!!

Bearing in mind the 30 day window for the booking of these new fandangled FastPass+ things, I also had to sort out our park tickets so that they arrive at least 30 days before we go. I always sort of dread and relish this in equal measure, as it involves a lot of hard work, but it also means the trip is close.  The task of working out the best value options for your park ticket needs can be a complex exercise, but I have to give a big thank you at this point to someone who has done a huge amount of work to make this task so much easier. Slinky Malinki, a user on the Dibb forum has put together a comparison spreadsheet which does all the work for you.  Using that, I have got 21 day ultimate tickets for Disney and 14 day 2 park tickets for Universal for what appear to be the best prices currently available. When your party is six adults, that’s a hefty transaction.

(Disclaimer – If you use it and something isn’t right then don’t moan to me!)

Never have I spent so much cash with a smile on my face. This week I also went to the huge expense of getting us a FastPass, this one being for security at Manchester Airport. Whether or not it helps that much I don’t know but at £3.50 each it’s worth the risk I guess.

Earlier in the week saw both the girls return home. Louise and I had the house to ourselves unusually last week and it was strangely peaceful and drama free. Still, it was good to have them both back, Rebecca from her Barcelona trip and Emily from a few days dog sitting for a relative of her boyfriend.

Rebecca loved Barcelona and they had a great time. Most of the photos we saw were similar to this. I don’t know where she gets this from? 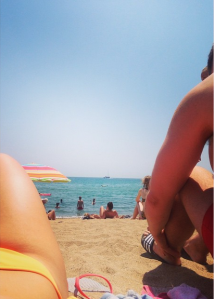 Personally, I am on the other side of another 2am finish last night after the mighty Mustard gigged once again. Of all the gigs I’ve done, I have to say that playing at a stadium is my favourite kind!  I took this as we were setting up. 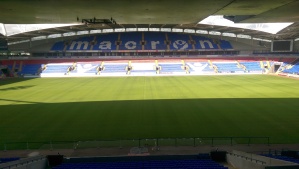 We were playing at a gala dinner for a local running club who were celebrating their 30th anniversary. The venue, audience and atmosphere were excellent and I made my fewest amount of mistakes to date, so all was good. Everyone seemed to have a good time and the packed dance floor throughout was testament to that. We had a good few photos taken which will be up on the Mustard website at some point in the future, if you wish to see middle aged rock gods at work.

So I end the week with a full house, an empty back account and a lack of sleep but I don’t really mind any of them.